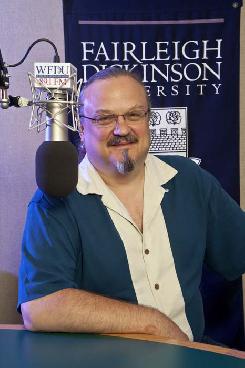 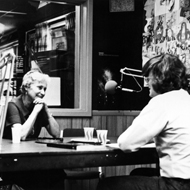 Woody Guthrie's Wardy Forty
This extraordinary book chronicles the period of Woody Guthrie's life spent at Greystone Hospital in New Jersey. This was a period of Woody's life that only his family and a few friends witnessed, but the story will be told through the photos of Phil Buehler who went to Greystone about 10 years ago and captured images of the abandoned portion of the hospital where Woody stayed. The haunting images are juxtaposed with Guthrie family photos that are both heart breaking and heart warming. They capture a Woody Guthrie that most of us never saw, a man who was struggling with a disease that was robbing him of his ability to function, yet he was still creating amazing works.

I had the honor of interviewing Woody's widow Marjorie Guthrie back in the mid 70's at WFDU. Phil used my interview along with a number of other interviews collected from friends and family of Guthrie. The photo above captures a moment that changed the direction of my life. After being inspired by Marjorie, my love of folk music and radio really grew, and I am still doing my radio show and working in the folk community because of Marjorie, and of course Woody. ~ Ron Olesko

Ron Olesko grew up during the Folk Revival of the 1960’s and some of his earliest memories include being captivated by songs such as "Sloop John B." and "There's A Hole In The Bucket" being performed on the Captain Kangaroo TV show.    In 1975 he enrolled at Fairleigh Dickinson University and joined WFDU-FM on his first day as a freshman and has been with the station ever since.   Ron started as a DJ playing alternative rock interspersed with folk music.   In 1977 he presented a program with Marjorie Guthrie as his guest, the widow of one of Ron's musical heroes, Woody Guthrie.  From that point on, folk music became the centerpiece of Ron's radio work.

In 1980, just after he graduated from FDU, Ron began the series “Traditions”, now WFDU-FM’s longest running program.   Ron also appears on Sirius XM Satellite Radio's folk channel's The Village and was nominated in the Broadcaster Category for 2007 Folk Alliance Music & Business Awards.  In addition, Ron is the President of the Hurdy Gurdy Folk Music Club in Fair Lawn, NJ and also writes for Sing Out! Magazine.  When taking a break from folk music, Ron can either be found in Section 112 at Red Bull Arena in Harrison, New Jersey on game day or sitting in his den watching his beloved New York Mets.